Being a Nepali and having been grown in the lap of forest and hills, I have always wanted to pay back for the environment that has given me food, clothes, shelter, air, water- okay everything. During my schooling days, I was enrolled in NATURE CLUB. As the name suggests, it works for the climate change issues, our potential initiatives in it and about sustainable environmental practices. I frequently attend seminars and workshops on climate change, which help me to explore more on this field. I can’t feel more thankful to our respected Sudarshan raj Bhandari sir and Kanchan shrestha didi, for inciting this kind of platform to the young kinds at their early age.

At present I am studying agricultural science at one of the semi urban parts of Nepal (Lamjung, Sundarbazar). As I was always willing to take a step and work for the environmental issues and share my ideas to the young souls here at Lamjung, I went to put forward my ideas and asked for a permission to conduct workshops at local schools. Thankfully, their supportive words made my cause even bigger. Now onwards, I am conducting workshops on weekly basis at;  Future Star Higher Secondary English Boarding School, Bhotae-Odar, Lamjung and Insight Vision Academy, Lamjung Sundarbazar. influencing five hundred  young kinds at two different schools. 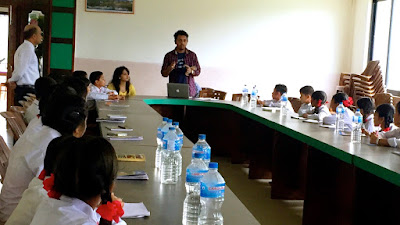 Thanks to the school bus which took us to the school, and to the school officials who trusted us enough and offered us the opportunity. But our greatest thanks goes to the curious students, who showed great discipline and keen interest.

To begin our programme I gave the initial general introduction and some words regarding the purpose of the event which was followed by a short discussion by Manoj Barakoti, that by a presentation of Bibek Dhital, to end with some encouraging words regarding the initiatives the students can themselves take within their community by me again. Anusha Sharma was together with us all the time.

Manoj began by putting forward the idea of life of the non-living things, extrapolating the idea to the earth. He then talked about the versatility of the climate, eventually presenting the case of man caused environmental damage , specially the  climate change. In about fifteen minutes, he attempted to justify why climate change and environmental conservation are the burning issues.
Bibek presented his interactive video which dealt with the rampant melting of the ice cap at the arctic region; with the extinction of the polar bear within 2040 AD as a potential consequence. He then talked about carbon emission , the long term effects it can have, before discussing the  personal initiatives that the students can take from their side to reduce it.

I focussed my conversation towards the activities and areas that the newly forming club is going to conduct and cover. I continued the case of personal commitment to conserve the environment.This was followed by more mechanical, routine events- the selection of class representatives to convey the message, a brief discussion about the activities that the newly forming club would undertake, and consultations with the teachers. Because of time crunch, Anusha was denied of her presentation, but, we hope more from her in the coming days. Thus ended our brief program on this enormous issue of colossal importance.

Our activity includes
Student of our club will be using fountain pen instead of ball pen from today which will ultimately decrease environment pollutant.
Student were instructed to turn their light, Tv off when they are not using.

Assignments for students
To Implement their knowledge in practical life.
To write Learning of the day.
To write what will be their friends and family reaction when they share all the knowledge, they have learned at eco club.

BEST two article will be published in school's notice board.